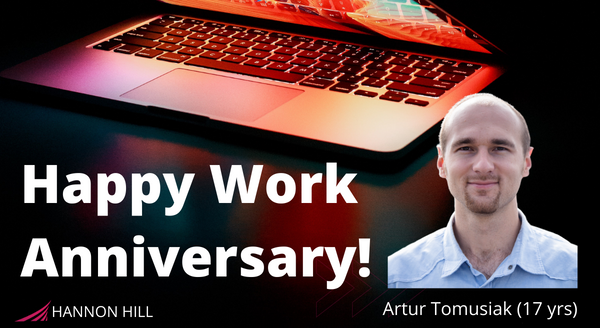 In December, we honor and thank Artur Tomusiak, Senior Software Engineer, for his commitment and dedication to Hannon Hill during the last 17 years!

Artur was born and raised in Mielec, Poland, about four hours south of the nation's capital, Warsaw, until his family immigrated to the United States 20 years ago in August of 2002. He spent his first year in the U.S. finishing high school, then went on to attend Southern Polytechnic State University, now known as Kennesaw State University (KSU), on a full scholarship.

His college major? You guessed it. Software engineering, which he completed in three years!

While attending KSU, Artur applied for an internship opportunity at Hannon Hill and got the job. He worked part-time as an intern throughout college while taking on a full course load. Leadership quickly noticed his work ethic, and as a result of his dedication to both his academics and responsibilities at the firm, Artur received a full-time job offer upon graduation.

He still remembers it like it was yesterday when he first walked into the office, then located on the eighth floor of Tower Place in Buckhead, just a few blocks down the street from our current office at the Atlanta Tech Village. Tall, purple cubicle walls, a desktop PC with two monitors set up with Cascade Server, Cascade CMS' predecessor, and the air filled with the excitement that only a startup can provide.

During his first few years at Hannon Hill, Artur worked as a developer on the professional services team. As his career progressed and he became more knowledgeable about the software, Artur switched departments and started working as a software engineer. Growing in wisdom and subject matter expertise, he was ultimately promoted to senior software engineer, a position he still holds today.

Thinking about some of the major milestones and achievements he considers worth mentioning and is most proud of is his contribution to the evolution from Cascade Server to Cascade CMS. He was fortunate enough to work on many of the features that make Cascade CMS one of the premier higher-ed content management systems.

Artur wears many hats at Hannon Hill, such as assisting support, conducting code reviews, assisting with site reliability, quality assurance, and documentation. But when he's asked to name the favorite part of his job, he always goes back to the basics - programming. Artur is a software engineer by training, and spending the day programming fills his cup.

You'll recognize one central theme - the people- if you read any of our previously published work anniversary or employee spotlights blog posts.

The people are what makes working at Hannon Hill so tremendous and helps produce one of the best possible content management systems the industry offers. It's no surprise that one of Artur's favorite memories about working at Hannon Hill include company outings, such as a day spent canoeing and jet skiing at Lake Burton, GA, or racing go-karts with his co-workers in Atlanta.

Artur looks confidently into the future. He believes in the resiliency of the company and its ability to grow continuously in the years to come. This belief isn't based on Hannon Hill's scale or size but because of its focus on each customer and willingness to serve as a guide on everything CMS and website personalization.

Artur, we're proud to have you as part of the Hannon Hill community, and thank you for your service to the company!